History of Laser tag, How it works, and What makes it the best cardio for participants 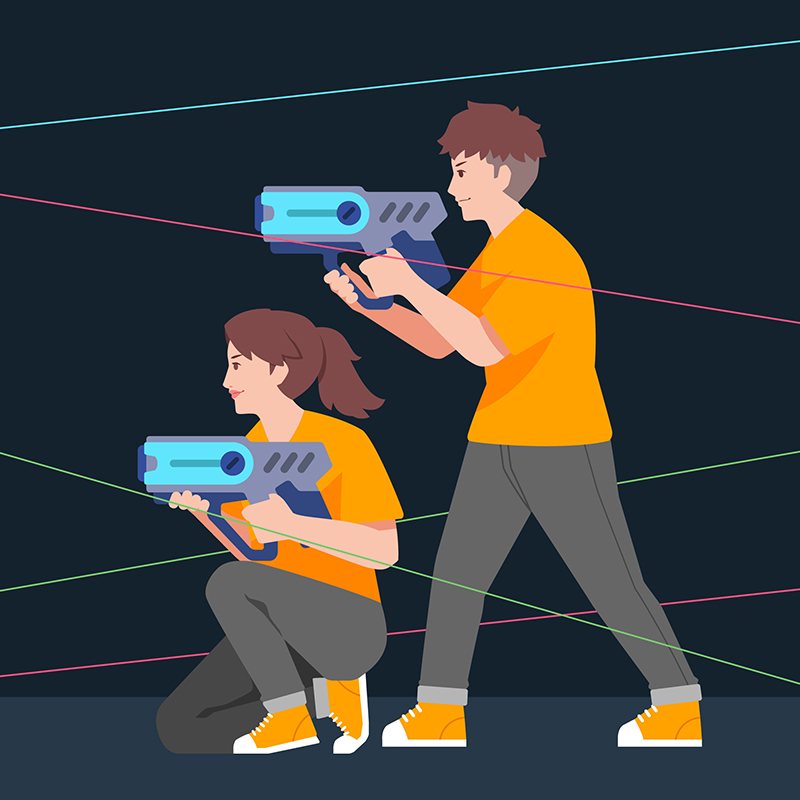 History of Laser tag, How it works, and What makes it the best cardio for participants

Laser tag guns have grown in popularity over the years and are now regularly utilized as a source of entertainment at both children's and adults' parties. There is no better method to gather your pals if you enjoy laser guns. When each player launches a beam of light at the opponent, it provides a tremendous sense of accomplishment. But have you ever wondered how Laser tag California works?

Today we take a look at the best explanation of how laser tag technology works and what is the history behind it and what makes it the perfect cardio exercise for people who engage in this sport.

So without wasting any further time, Let's look into Laser tag California today.

The operation of a laser tag

Most Laser tags indoors near me do not employ lasers; instead, these guns use infrared lamps that emit light in the form of beams. Each pistol features an infrared light emitter that is extremely directional. When the light is exceedingly thin and straight, these laser guns can be used as flashlights. The gun's sensors absorb light beams and detect them using optical filters.

The Benefits of Using Infrared Light

The reasons why these guns use infrared instead of actual lasers are intriguing. For starters, a laser can be hazardous to both the user and the target of the laser. Even though the laser's strength is minimal, it can still cause eye damage. Second, a laser disrupts the game because most people play it in a dark environment.

Finally, the genuine laser cannot capture a shot. In contrast, when infrared light is employed in the indoor Laser tag game, it may be detected by a sensor. Each player receives a detailed record of his or her performance at the end of the game. It would tell the child how many persons he or she shot and how many shots he or she got. This, however, is not possible with genuine lasers.

Indoor Laser tag is a novel activity that has been around for a long time, but its health benefits were just recently recognized. The exciting sport entails a lot of running, jumping, jogging, and ducking, which can improve your fitness and get you in shape.

You'd be drenched in perspiration and feeling the same burn after a single 15-20 minute cycle.

Cardio Workouts and Their Advantages.

Cardio exercise is defined as any activity that causes you to breathe heavily by raising your heart rate. Running, jogging, hiking, riding, leaping, boot camps, weight training, interval training, and other activities are included. Cardio should incorporate the largest muscles in your body (arms, legs, or both) and raise their need for oxygen.

This will cause your respiration and heart rate to speed up. Cardio activities help you lose weight and remain fit by strengthening your heart and lungs, improving your metabolism, and burning calories. However, many people despise cardio activities because they believe they exclusively involve long runs on a treadmill or in a park. Many people dislike the idea of going to the gym because they lack time, have stiff joints, or are too uncomfortable in public.

Laser tag Newport beach is a fast-paced game in which your legs are constantly in action, except when hiding behind obstacles to save your virtual life. Aside from these few seconds of hide-and-seek, you'll be immersed in a lot of physical activity in addition to the mission of each game. Your arms will be continually involved as you use a heavy-duty laser tag gun to hit your targets as quickly as possible.

The secret to winning a Laser tag Newport beach game is constant movement. As a result, you'll be constantly sprinting, ducking, jogging, and moving around to avoid your opponent's laser hits, making it a fun cardiovascular workout and weight-loss game. As a result, laser tag is much more than a fun addictive game. It's a workout that feels like fun and is a terrific way to fit fitness into your hectic schedule.

Who Made Laser Tag?

Have you got a favorite game? Maybe you're the greatest at checkers or chess in your family. Maybe you'd rather play hide and seek. Or perhaps you're a fan of the game at the heart of today's Wonder of the Day! That's correct! Today we're going to learn all about laser tag.

Have you ever tried your hand at laser tag? If so, you're aware that nothing else compares. It's easy to understand why the game is so popular as you dart through the fog, evading lasers as you aim for members of the opposing side. It's becoming a popular choice for birthday parties and team-building exercises. But have you ever thought about how laser tag got its start?

In the 1970s and 1980s, one film franchise swept the globe. It used extraordinary effects that audiences had never seen before. The movie depicted spaceships zipping through space and a hologram message from a distressed princess. Audiences gasped as actors fired lasers at each other from futuristic blasters. What exactly are we discussing? Of course, Star Wars!

The role of Star Wars

The Star Wars films also aided in the introduction of a new form of entertainment: laser tag. George Carter III of Dallas, Texas, wants to move traditional children's activities like tag into the future. Carter established the first laser tag arena in 1984, inspired by the blasters he saw in Star Wars. He gave it the name Photon.

Photon was a big success. Other laser tag companies entered the market as Carter launched more facilities. The game quickly evolved. Originally intended for young adults, it quickly became popular with children as well. Laser tag is available in a variety of formats now, including classic, tactical, and toy laser tag.

How to get going?

How do you engage in laser tag? Begin by assembling a group of friends and relatives. Then you divide into two groups. Laser tag can be played both at home and in a professional arena. If you're going to play at home, be sure you have the proper equipment. Everyone will require their own laser tag vest and phaser.

If you're a big lover of the game, you should check out the Laser Tag Museum. It is located in Louisville, Kentucky, and it houses a range of artifacts that will help you learn about Laser tag Newport beach over the years.

Have you ever tried your hand at Laser tag Newport beach? If not, does it sound enjoyable? The game is still evolving today. George Carter has even aided in the development of laser tag software for cell phones in recent years! As technology evolves, more opportunities for people to play the game together may emerge.

Finally, it's time to have some fun! Lasers are used to score points by striking the vests of the other team. When you feel your vest vibrate, you've been hit. When they detect a laser hit, many vests produce a noise. While playing, keep in mind that laser tag is a non-contact sport. It's fine to be competitive, but remember to always follow the rules and respect your fellow players. When everyone participates, indoor Laser tag can be an excellent team-building activity.

Have fun playing with your friends and family members, whether you go to a local Laser tag indoors near me facility or assemble a group for a game of conventional tag in your local park. Tag, both laser and traditional, is a fun way to get some exercise while bonding with those you care about. So get a few friends and have some fun!