Laser Tag vs. Paintball: Which one is Better? 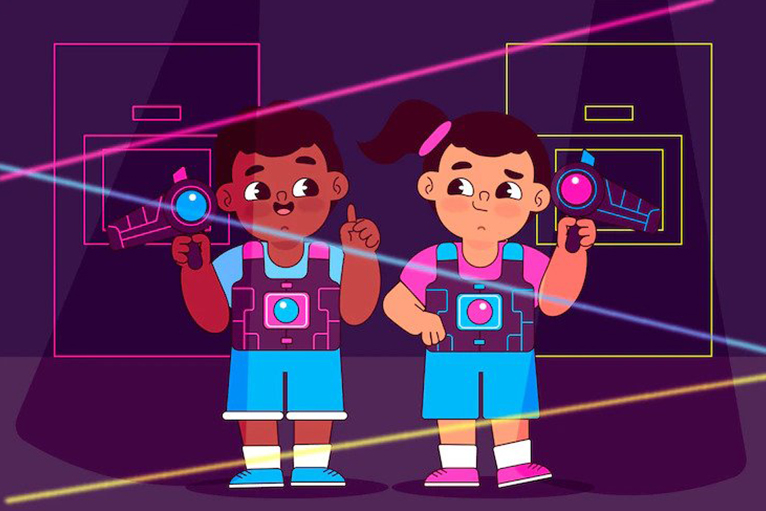 Laser Tag vs. Paintball: Which one is Better?

If you want to have laser tag for birthday party, take into account two things. First and foremost, after Googling “laser tag near me” take them to a great laser tag arena where they can play laser tag and have an amazing time. Second, if the parties include older kids or adults, instead of laser tag, you could contemplate paintball, which offers them the chance to get a little more muddled.

While paintball has been around since the 70s, laser tag became one of the greatest trends of the 80s and 90s, with kids all around the country filling the arenas to play. Both of these games are very enjoyable to play and are appropriate for most ages. This article aims to answer questions like which one is more suitable for younger children than the other. And which one is more enjoyable, by and large? Although all things considered, it's difficult to say, here are some points that will help you make your choice.

The main difference between paintball and laser tag is the first four letters of the former, "pain." The pain you'll suffer while playing (paintball). While laser tag is a totally torment-free game, you can end up with injuries and knocks from playing paintball. Nonetheless, paintball fans might get offended (even if it's still better than getting injured), and say that it is all essential for having a good time.

In reality, the argument about which one of these is better is actually difficult. The truth is that they're both really fun to play, and just like any other game, both of them have advantages and disadvantages to them as well. While playing laser tag truly gives kids a good time, as they grow up, it can get a little easy and boring for them. Playing laser tag Sherman Oaks in small arenas can be uncomfortable for them, which is the reason they sometimes consider getting their own laser tag set to play with themselves and make their own games.

On the other hand, paintball is great as well, but there are a few things that you probably won't like about it. Thus, let's investigate the advantages and disadvantages of both paintball and laser tag.

Advantages and Disadvantages of Paintball

Paintball, most importantly, induces sportsmanship and confidence in players. Paintball drives you to either get along with your group or you will lose the game. If you want to be good at this game, you have to work hard; otherwise it is difficult because occasionally you will play against teams who are way better compared to your group.

One more advantage of paintball over laser tag is that paintball feels significantly more realistic. In spite of the fact that laser tag San Dimas is an effective method for having a good time, it doesn't feel especially war-like when you're discharging your weapons.

If you like strategic games, paintball is by a long shot the better choice. In paintball, you truly need to work in groups to guarantee the endurance of yourself and your colleagues. This is less evident in laser tag. Laser tag can get over quickly, while you can make an entire day of playing paintball.

There are obviously cons to using paintball weapons with your friends, and reasons why games might take somewhat longer than playing laser tag. The gear you play paintball with is the only reason why some decide to stay away from it.

Paintball is really costly, particularly if you proceed to play it at a paintball arena. One strategy for getting around this is to get the best paintball kit for beginners, which can bring down your expenses. However, ammunition is still costly.

In spite of the fact that it doesn't hurt excessively, one significant disadvantage of paintball may be that paintball can hurt. For grown-ups, this might not be a big problem, but for more young players, it can be dangerously painful, particularly if they get hit at point-blank range.

Advantages and Disadvantages of Laser Tag

You'll have a different assessment of how the actual game truly is based on where you play Call of Duty laser tag. If you play genuine laser tag at a decent laser tag arena, there's no question that it will be awesome to play.

While paintball is more designed for people wanting a more serious and adventurous game, laser tag is focused on having a great time and light fun. If you're attempting to stay away from serious games, laser tag may be a superior choice.

If you get your own laser tag set, laser tag can really be very affordable. What's more, regardless of whether you're going to an arena, it will still be fundamentally less expensive than paintball since you don't need to renew ammunition.

By and large, laser tag is more suitable for young kids. You can incorporate small kids and older kids into a laser tag game, but you can't do this while playing paintball.

The most compelling thing that laser tag has is a genuine spirit of sportsmanship, which you also get in other sports like paintball. Laser tag is fun, yet it's not especially aggressive, and it probably won't be enough for certain individuals looking for competitive matches.

Despite the fact that the quality of laser tag firearms has improved a lot, there are going to be chances where you will swear that you have a hit, but it won’t be registered due to sensors not listing them. This is simply a sad part of laser tag, and it sure can be baffling now and again.