Playing Games With Kids: Why is it necessary to give quality time to your kids? 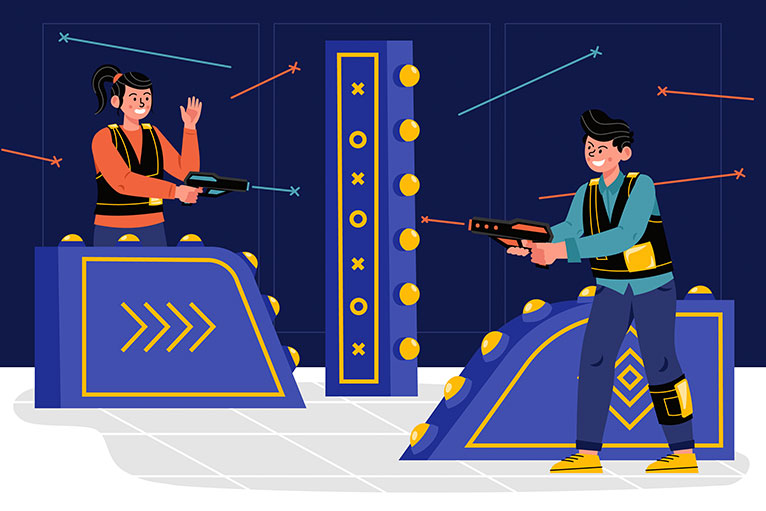 Playing Games With Kids: Why is it necessary to give quality time to your kids?

Are you one of those parents who returns home after a long day of work feeling exhausted? After working hard the whole day, all you want to do is just get in your cozy bed and sleep your worries away. But just as you enter your home and remove your shoes, you hear: "Mama! Daddy! Will you come to play with me? "

At that moment, playing with your child appears to be a task, and most of the time you do shun them away, stating an excuse. But have you ever thought about the benefits that half an hour of playing can do to your child? Playing games benefit children intellectually, physically, and socially. But for your child when she plays, particularly when she plays with you, apart from the stated benefits, the biggest one is their faces lighting up. Here are some benefits that you should know about if you have a child and don’t spend much time with them.

What are the advantages of parent-child play?

All kids benefit from unrestricted recess with different kids, including their siblings, and sometimes also by playing by themselves in their rooms or outside. But, there are exceptional advantages that come from playing with a parent or a fun uncle or aunt.  The experiences that other people give a person aren’t as effective as the ones their parents give them. What a parent says or does to them remains with them for life, so be among those who contributed to making their kids happy, confident, and peaceful individuals.

Play assists kids with fostering a wide range of abilities.

Playing with your child is one method for helping them develop interactive abilities and poise. Children’s psyches resemble sponges. They absorb everything around them. As they play with their parents and others, they figure out how individuals act in group environments. They also learn from you what is and is not acceptable in a social setting or otherwise. Also, research has connected parent-kid playing together to the advancement of many specific abilities, including:

Besides, while kids foster a large number of the above abilities while playing with their siblings, playing with a parent offers a child a more mature and varied type of play. Playing with adults in their lives broadens children's minds in ways that playing with other children, particularly older siblings, does not.

Playing with different kids is fun, but nothing comes even close to the delight and fulfillment of getting one's parents to act like a monster that he is fighting or coming to their tea party. It's the stuff of memories.

Playing with your kids helps them build strong relationships.

Playing together is also an excellent way to bond with your child. Playing adds happiness, vitality, and resilience to relationships. It can improve feelings of hatred, anger, and hurt. Through play, kids figure out how to trust others and have a real sense of security.

By putting forth a conscious attempt to integrate humor and play into your day-to-day activities with your kids, you can work on the nature of your connections and connect on a more serious level. Playing and laughing together plays an important role in improving serious areas of strength for building parent-child relationships by uniting you, creating a positive bond, and resolving conflict.

Play is great for a mother and father's well-being as well.

It means a lot to play with your kid for the good of your kid. But, if that wasn't already enough, you get benefits from playing with your kid as well. The chemical oxytocin, which plays a part in parent-baby bonding, is released in the body whenever moms and dads take part in loving play with their kids of all ages. Thus, the next time you're too depressed to play with your child or want to improve your mental and physical health, you could take a chance on becoming the ugly evil monster and watch your stress be stabbed by the diaper-wearing superman. Consider it a therapy session that you don't need to pay for.

How Should Parents Play with Their Children?

In case you don't know how to play with your kid, simply relax! Most parents don’t know how to "tawk wike diss" or play silly games. Kids are naive. You can simply slap a cushion and they will think it's a game. They play imaginary games or engage in honest and actual behavior from the start. All you really need to do to be a good close companion to your child is to pay attention to her stories, support her preferred method of play, and participate in any discussion about how to save the world from the robot monster.

Make sure to be a part of the conversation instead of persistently mediating or controlling the discussion. Allow your child to investigate his current situation and feelings. Allow him to attract you to his talks. Then be locked in and team up, which will train your child to do the same in his future conversations. Looking for some novel ideas for playing with your child? Look no further. These tips will surely help you, especially if you are a new parent:

In this period of digital innovation, kids are more attracted towards spending more time on their PC or iPad than investing energy in playing sports. Also, because parents cannot handle the fussing and crying, they encourage the use of these gadgets so that they get peace of mind. What you should understand as parents is that the less you play with them, the weaker your bond will be and the less socially active your child will be.Playing physical sports with your child, such as Call of Duty Laser Tag, is not only a fun activity, but it is also a great way for your child to improve various skills.

Laser Tag Los Angeles is a thrilling shooting game that can be played both inside and outside. Here are some benefits of laser tag halo that are great for your kids:

Laser Tag Sherman Oaks is a safe and entertaining game in which you are expected to shoot your opponent with the assistance of a weapon that fires infrared beams. Any kind of actual contact while playing this game results in a punishment. Laser tag is nothing like paintball. Laser tag San Dimas is a lot more secure in light of the fact that it includes no actual contact.

Indoor laser tag is normally played in a properly equipped field. The game is intended to be reasonable, giving an adventurous, battle-like experience to kids.

Provides Health Benefits: If you are stressed over your child spending a lot of energy in front of the PC screen, type "laser tag near me" on Google and take them to the nearest arena for some quality time. The game requires the players to run, starting with one position, then moving onto the next to follow their rivals. This way, your child gets a compelling cardio workout, which is good for his or her well-being. Laser tag Huntington Beach can assist your child with arising as a stronger and fitter individual.

Improving Team Building Skills: Setting up laser tag for birthday party is always a fun activity that includes playing against each other by forming groups, especially if the game includes both parents and kids. To defeat the other group, they need to make strategies and put them to use. Along these lines, the game builds cooperation among kids. Cooperation and bonding are not only fundamental to becoming a successful person in everyday life, but also deepen your bond with your parents and create a life-long memory. If your child can cultivate these qualities from an early age, it will be very beneficial.